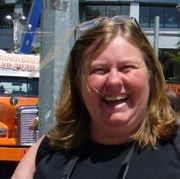 They built a wooden framed building in 1873 that they named St. Paul's Church, and united their group with the German Reformed Church of the United States. The first pastor, hired in 1875,  was Reverend G.B. Shick. The original wooden church stood until 1956, and was moved off of Main St and onto Lakewood to as Fellowship Hall when the current stone church was built in 1923. From Gary Conger, "Our granddaughters are 6th generation members of St. Paul’s Church. My grandparents Marie and Willard Garretson were the first couple married in the new (current) church building in 1924." Church member Barbara Petry also claims longstanding family membership in the church, with ancestors going back to Conrad Kohlepp, the church councils first treasurer in 1872. This picture was sent to members of the armed forces serving overseas in 1943. photos courtesy of Brian Harto.

Recently, the large Tiffany Glass window on the church's front wall was restored to its original beauty.