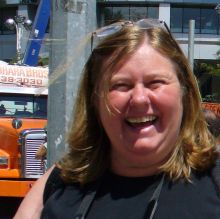 Do you know any Milltown ghost stories?

Milltown Library would like to host history lecture series
1 Reply

Started this discussion. Last reply by Barbara Wright May 14, 2008.

Barbara Wright has not received any gifts yet

St Paul's Church congregation began when a small group of Milltown residents began borrowing the Methodist Church to hold their own services around 1860. This group was pastorless, but relied on the services of Reverend C. Bank of The Reformed Church of New Brunswick.They built a wooden framed building in 1873 that they named St. Paul's Church, and united their group with the…See More
Jul 1, 2020
0 Comments

Barbara Wright left a comment for Robert Hilger aka Bobby Hilger
"Thanks, Bobby, for the wonderful pictures of Milltown and your family. Good luck with retirement!"
Jun 28, 2020

Did your parents/ grandparents live in Milltown? If so, what were their names?
Yes. My mother, Anna Miller Wright lived in Milltown all her life. Her parents were Anna Funk Miller and Jacob Miller, and they lived on Clay St. next to the firehouse. My grandmother was a cousin of the "big Funks" who lived on Washington Ave.My great grandparents had a farm in the Lawrence Brook neighborhood of East Brunswick.
My Dad, Tom Wright Sr. was a city boy from New Brunswick who moved here when he got married in 1939.

About Me:- Tell us about yourself
I've lived here all my life. I work as the librarian at the Parkview School

My sister, Shirley Pavelec Yasbin, along with my wife Cathy (who's from Woodbridge) enjoyed the Joyce Kilmer garden party. Of course I remember Mary Ann (she was in my class at OLOL) and see your brother at most of the "Boys of Milltown" gatherings. I spent a lot of time ar your cousins' house (Jimmy and Franny) especially in the fall of 1948 when they had one of gthe first TV sets in town. Used to stop by after school (OLOL) to watch Howdy Doody and Uncle Fred and the WPIX "Pixies" before I walked home to South Street. When the days got shorter I walked home in the near dark and could tell which families had TV sets by the blue glow coming from their living room windows.

I and all the other boys enjoyed summers when your Aunt Edythe, the singer with Tommy Dorsey, would spend a few days with your family. She (and we) enjoyed her sun bathing in your back yard. I remember one day when we gathered around her and she amazed us with some sort of slight-of-hand magic trick with a cigarette.

I have lots of photos of Milltown taken of town events by my father who was a semi-pro photographer. Also have some stories and documents about Milltown to share.

Like many families many in ours were drawn from New Brunswick by Michelin where my Great Grandfather James Cleland worked as did many others. He never moved to the town but my Grandfather, Joe Beatty, did in the early 30s. His brother James Beatty was already in town. My father's family, the Pavelec's, were living in Milltown in the early 30s as well.

I'm looking forward to sharing some things with the rest of the group.

James Selover said…
Hi Barbara, I have quite a bit of information re Milltown's history:I have a book "History of Union and Middlesex County" published in 1882 that contains a lot of info on Milltown. Also, I have a book "Natural History" by Hooker published in 1884 that was owned by by Dad's uncle H.R.B. Meyers who I remember fondly as Uncle Herb.I would be happy to mail them to the Historical Society if interested. Also, I have written a history of my mother and dad that I can send (email) as well as my childhood recollections from the 1930s to 1950 when I left Milltown after graduating from Rutgers.

Thank you for your welcome.

All my relatives had  left Milltown by 1930.

Here are a few details( I don't know if they are of any interest to you.)

His wife and two children had stayed in France.

Two members of the family appear on well-known photos you have in the museum :

He's also on the Michelin Band photo: squatting, left of the big drum.

Another name on the Michelin Band photo: Louis Fichen ( Fichant misspelt !) squatting right of the big drum .He lived at 144 Riva Avenue .

They had both learned to play the bugle in the Army.

Is your friend Debbie into Genealogy? Does she still live in the area?  Her Grandfather is probably Morris Schork. I know his family was big.

I didn't get a chance to write about my Schork Genealogy on my profile page.  I just wrote about the Rupps.  I will add more when I get a chance. Thanks.

Dear Barbara, thanks for the welcome message!

It will be a pleasure to share my own research on Michelin early years with you and the MHS members.

Note that my written english is horrible, but I will try to make me understand in the best way possible.

Jennifer Chico said…
Hi Barbara
Thank you for the helpful information! I would love to come to one of the meetings and speak to you and the other members. Are you guys meeting on Oct. 18th?
Thanks
Jen

Hello Barbara,  My name is Peter Stricker and I grew up in Milltown and attended Joyce Kilmer graduating in 1965.  My mom still lives in Milltown and my grandparents passed away several years ago.  I am very interested in Michelin Tire Co. history which I collect a lot of.  I remember growing up in Milltown and wish kids today had a childhood like we all had back then.  Now it is stay in the house and play with the computer and never getting to know people and just plain having kid fun.  I signed up on the historical web page.  Thanks for all this work you do......Peter

Thanks for the welcome, Barbara.  I lived on West Church St and had a good friend...Jeff Lins...who lived on Clay St...the number 49 jumps to mind although I'm not sure that's correct.  He lived a few doors up from Metz (?) grocery store on the corner of Clay and West Church St..  Carl

Hi Barbara!  I'm thrilled you are running this website.  I have pictures of my family and the Fireman's band that I will post.  I went to Germany this summer to meet cousins with whom I corresponded via email.  We found each other through the website of our great-grandfather's hometown!  Websites like these are such a rich and valuable resource!

I would like to send my German cousins a copy of the latest Milltown history book.  How can I get additional copies?  I have been able to purchase copies of the first Milltown book through ebay.  Thanks!

Is the old Firehouse coming Down on Main Street? The Sentinel article states the new firehouse will be on the old firehouse site?