This is tough, because this website is not active at all. Even though we have over 130 people who cared enough to join, it isn't a site that gets visited often, and when people do visit, they don't seem to be comfortable posting and sharing. So in that sense, when I have something to say about Milltown History, more people would see the post, or the images on Facebook.

But Facebook does not archive posts in a way…

Founded in 1968 for the purpose of preserving the historical and cultural significance of Milltown and to provide a congenial atmosphere where the interests of the members could be shared. We currently have over 1,600 artifacts housed in two historic houses.

Meetings: Third Tuesday of the month at 6:30 PM at the Museum Annex.

Join us for our first Holiday Festival and Concert

Please let me know if you will be able to volunteer for this event! bwright@milltownps.org 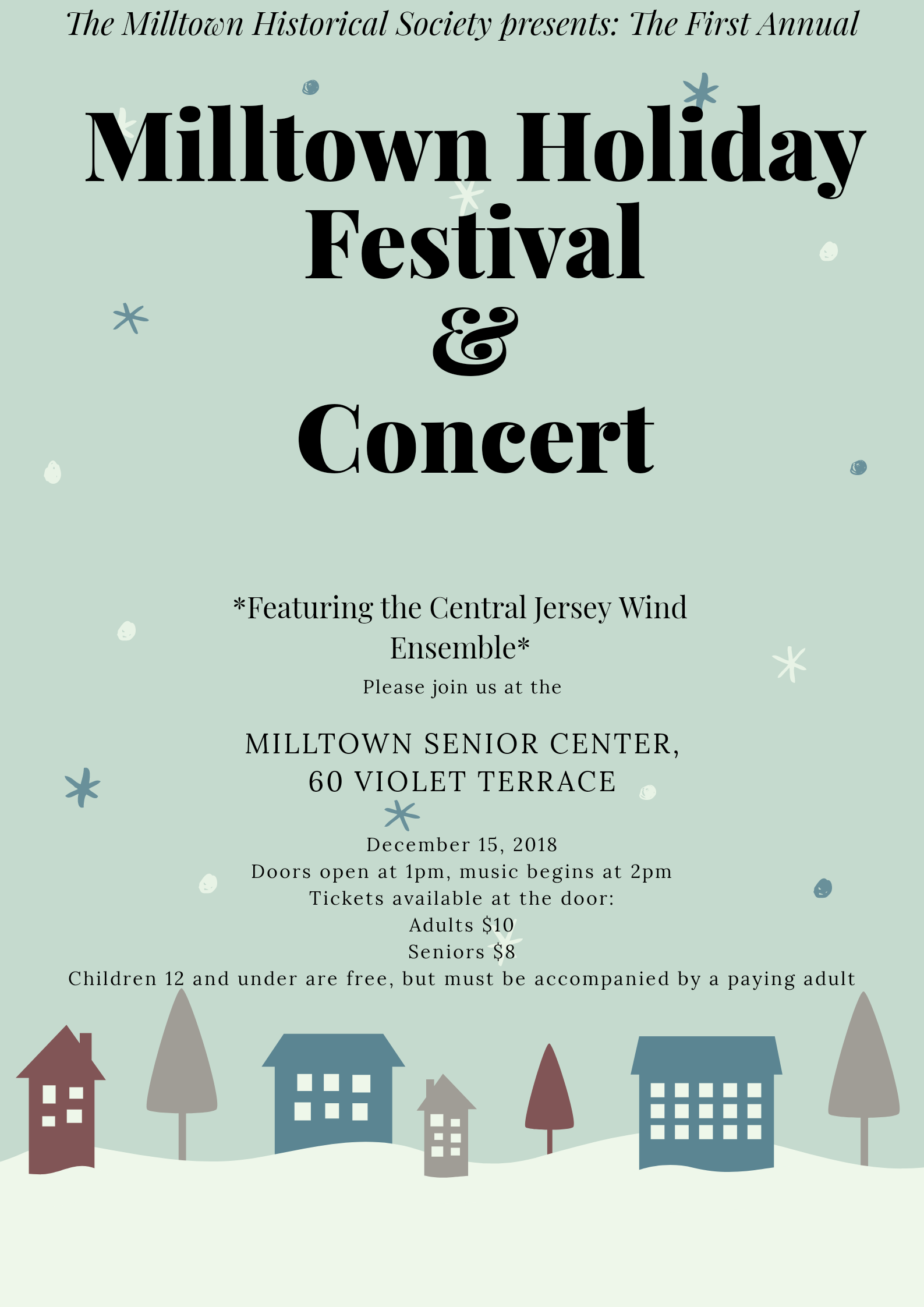 Several of us have recently been searching Ancestry.com, building our Milltown and extended family trees.

These trees are searchable on the Ancestry.com site. A post I put up on the Remembering Milltown Facebook page showed that there is even greater interest in finding the family histories of many individuals, either residing in, or from Milltown.

These are the trees that we have worked on. If you would like help and advice on looking up your own Milltown-related family tree,…

I was given a box of old photographs that I believe are of Grace Junker Regnault and her family. No names are written on any photos, but they were in the trash at her home on Chestnut St. as her home was being cleaned out after her death at age 101. Grace was the child of Catherine Heyl Junker and William Junker of Church St. Milltown. Her family were parishioners of St Paul's church.

I will scan and post the pictures on this website, but if you are a relative or descendant of Grace…

Pictures of a changing Ford Ave.

Readers, as you probably know, the Michelin plants on Ford Avenue in Milltown are being razed. Please share any pictures you have of the old or new Ford Ave here, so we can keep a record of the site.

The Michelin buildings are coming down!

More iconic Milltown buildings are being demolished. How do you feel about this? Feel free to comment and chat on this site. And add pictures!!!

If you want to see the smokestack and water tower preserved, please sign this petition …

Do you have memories of Doby's Sub Shop, Doby's Deli or of the bowling alley on Broad St? a Post by Barbara Dobrzynski Justice

My grandfather, Michael Stankowicz moved from NYC to Milltown to open Stank,s grocery store. This was around 1916. He brought his wife and three children, my Mother Victoria Dobrzynsi being a baby at the time. this store was on the corner of South and Broad Street. He prospered and then opened the first Bowling Alley in tHe area. 4 lanes. Grandpa ran this for years. Another child came to the family, a boy Al Stankowicz. Al grew up went to war with the Army came home and continued to…

You are welcome to join us at the Milltown Historical Society Annex building on the third Tuesday of this and every month beginning at 6:30 pm.

A new member of this site writes :

I am documentalist for tv and cinema and I AM WORKING ON A DOUCiMENTARY FILM on the immigration of the people of gourin ( bretagne, france) in the usa and who had worked to michelin milltown factory at the beginning at the beginiing of the XX century

What is your interest in Milltown history?
For this movie, I am searching photos of the michelin factory from 1900 to 1929 :
workers who are working…

Many visitors to this website have a connection to the family of Philip Kuhlthau, the first of the German farmers from Oberzell, Germany to emigrate to Milltown. If you, you may be interested in some photographs of people who could possibly be your ancestors, and who might even be you!

Come visit the Milltown Historical Society this Saturday, and you will learn how our earliest residents decorated and celebrated winter holidays. Have you ever heard of a goose feather Christmas tree? Originally from Germany, these were the first artificial Christmas trees. We have a beautiful white feather tree in our annex building. Come see it and hear the whole history!

There are hundreds of stories at the Milltown Historical Society and we'd love to share some with you.

Enjoy the hospitality of our Junior Girl Scouts as they describe life from mid 19th century until mid 20th century, and other fascinating history of Milltown.

We will be serving lemonade and cookies as an added treat for visiting!

Many new members have signed on to this website in recent weeks, echoing the great rush of activity on Brian Harto's Facebook group, "Remembering Milltown".

Please feel free to make this site your own. You may write blog posts, upload your pictures of Milltown and comment on other's photos, and share memories. Take a few moments to browse the photos that others have already shared, and read the Milltown History links if they interest you.

And if Milltown History is a passion…

Come to Our Open House!

Visitors to the Milltown Museums frequently remark that they always wanted to visit, and that they are so glad they finally took the opportunity to go. Whether that is the case with you, if you have visited before, or if this your first time even noticing our old house near the fire house, we have some great new displays for you to see.

Along with the general store/post office, the old time school and Michellin displays, we feature in our parlor and kitchen the furnishings and…